BEJEWELED: What a Tangled Web We Weave by Chelle Ramsey

Author Chelle Ramsey is stopping by today on her blog tour to welcome us to The House of Bejeweled and share an excerpt from Book 2 in the series — Bejeweled: What a Tangled Web We Weave. Enjoy!

Olivia’s dreams have finally begun to come true, as she marries the man who’s held her heart for twenty years. Her beauty salon is prospering, and she has begun rebuilding her team, after seeds of discord were sowed and bonds were broken. Everything is beginning to look up, or so she thinks. When a scandal is leaked to the media, Olivia’s dream of expanding is in jeopardy. She must step up and play hard ball in a game with which she’s unfamiliar.

Nikki had dreams of building a beautiful family with a loving husband. But after looking at the shattered pieces of her broken life, she is losing hope and desires more. She wants more than the shame of barrenness, and more than physical abuse from his drinking binges. One phone call gives her courage to escape the deadly clutches of her husband. Yet, when she finds strength in another’s arms she finds herself spinning more lies. Nikki’s web of deceit is going to cost all those who are close and it could just cost her, her life.

When deception is the name of the game, who all will have to share the pain?

The pain was easing up somewhat as Nikki and Wesley entered the breezeway at his apartments. Unlocking the door, his eyes softened when he looked at her face once again.

She saw a mixture of anger and compassion nestled there.

“What?” she asked when he continued to stare at her longer than what she deemed comfortable.

“Nothing,” he said, shaking his head. Wesley led her into a galley kitchen and pulled a sandwich bag from one of the cabinets, filled it with ice, and then wrapped it in a paper towel before applying it to her face.

She was in awe at the tenderness with which this man handled her. Every time he touched or said a word to her, it was with such protection, like she had never known. This was a side of Wesley that she had not seen in the five years of knowing him.

“Come on,” he said, grabbing her by her free hand and leading her to the back of the apartment. She looked around at his bedroom; not at all what she would have expected for a single man. Decorated in oranges, greens, browns, and yellows, it had a Caribbean look and feel to it. The room was small, but neat and exhibited a nice décor. The full-sized bed sat directly opposite the black-framed, chestnut-colored dresser. To the right of his bed was a small nightstand in the same black framing and chestnut top as the bed and the dresser. To the left of his bed was a double-paned window, with orange, brown, and green curtains blocking out the midday sun. He walked over to the window and opened the curtains halfway and then opened the blinds to allow the sun to stream through.

“Where are you going?” she asked with a look of apprehension in her eyes.

His eyebrows lifted slightly. “Just to the bathroom, Nikki. I’ll be back.”

Exhaling a deep breath, she realized that a new fear had come over her. In all the altercations she had endured with Carlos, he had never left her for dead. Why did he leave like that? What if the neighbors didn’t come? I could’ve died in that bathroom, she thought.

She tried to fight back the tears, but they betrayed her. Sucking in her sobs, she stood and walked to his dresser and began looking at his pictures, anything that would take her mind off her problems. There were a couple of him and his father at various stages of his life, a few of some children, and one of a lady she assumed to be his mother. She stood up and walked to the bed, staring at the amazing likeness he had to this woman.

She jumped at the sound of his voice; she hadn’t heard him return to the bedroom.

“Oh, I didn’t hear you come up. Are you always so quiet?” she asked as he came and stood beside her. She still had not looked at him, wishing she could make the tears disappear from her eyes and face.

“No. Are you always so scary?” he teased. He regretted the words almost the moment he said them. Her body tensed up, and she looked down. Her fear had come as a result of the relationship she was in. She was always tense and on edge, because she never knew what fuse Carlos was about to blow.

“Hey, it’s okay. I’m sorry. Here, look at me,” he said, turning her face up towards him. “Why are you crying?” he asked as he wiped her tears away with his fingers.

“I’m sorry. I just…I don’t know.” She couldn’t explain if she wanted to. No one would understand her confusion or pain. She could forgive Carlos if he just had not left her. Didn’t he love her? Didn’t he want to work things out? Maybe he didn’t love her, after all. If he did, he would not have left her there like that.

“Don’t be sorry. You haven’t done anything wrong. I have the feeling you have spent many years apologizing,” Wesley stated.

He lovingly caressed the bruise that had formed on the right side of her face.

“Too beautiful,” Wesley said, being drawn into the power of her presence in his bedroom.

“You. You’re too beautiful for this. I don’t want you to be scared every time people come near you. Relax, okay? Just be…I promise I won’t ever do nothing to hurt you,” he said as he drew her nearer to him. Looking down into her big, dark brown eyes, he felt himself getting lost.

Nikki didn’t know what she was feeling or what was happening between the two of them. And she couldn’t contain herself as he pressed his full firm lips against her soft, lush ones. As their foreheads touched, he continued to gently apply pressure to her lips, asking for permission to enter in. 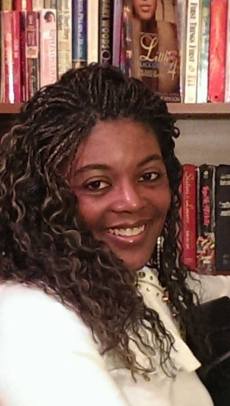 An original Georgia Peach, Chelle Ramsey is the author of five published and several waiting-on-the-shelf contemporary fiction books, with a focus on women’s fiction. Many of her stories are based in her birthplace of Atlanta or her husband’s hometown of Cincinnati, where readers can relate to local hot spots and events. Chelle wants people to become empowered to rise above life’s adversities, with faith in God, and belief in themselves. She sprinkles words of encouragement and inspiration throughout all of her real life fiction novels.

Chelle holds an MBA in Human Resource Management, which she puts to use in her property management role by day, while she writes her fiction novels by night. Her most important roles are those of a wife and mother of three. During her “me time,” she loves listening to music, and becomes enraptured with the enthralling stories of Terry McMillan, and Nora Roberts. She especially enjoys trying to solve the engaging mysteries of James Patterson and Stuart Woods, while eating a bowl of butter pecan ice cream. Chelle resides in a rural community of Atlanta, GA and enjoys writing, family time, ministering through dance at church, and watching NBA games with her husband. 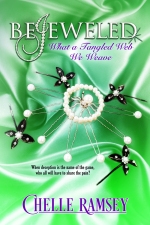 PAPERBACK: Book 1 – Bejeweled: The Flight of an Angel

PAPERBACK: Book 2 – Bejeweled: What a Tangled Web We Weave

3 thoughts on “BEJEWELED: What a Tangled Web We Weave by Chelle Ramsey”

Thanks for having me on your blog today. I hope your readers enjoy this taste of BeJeweled: What A Tangled Web We Weave, book 2 in The House of BeJeweled series.

All content on this site is protected by copyright and may not be rewritten, published, reproduced, distributed, transmitted, rebroadcast in any form, or by any means, without the expressed written consent of Rae Lamar.